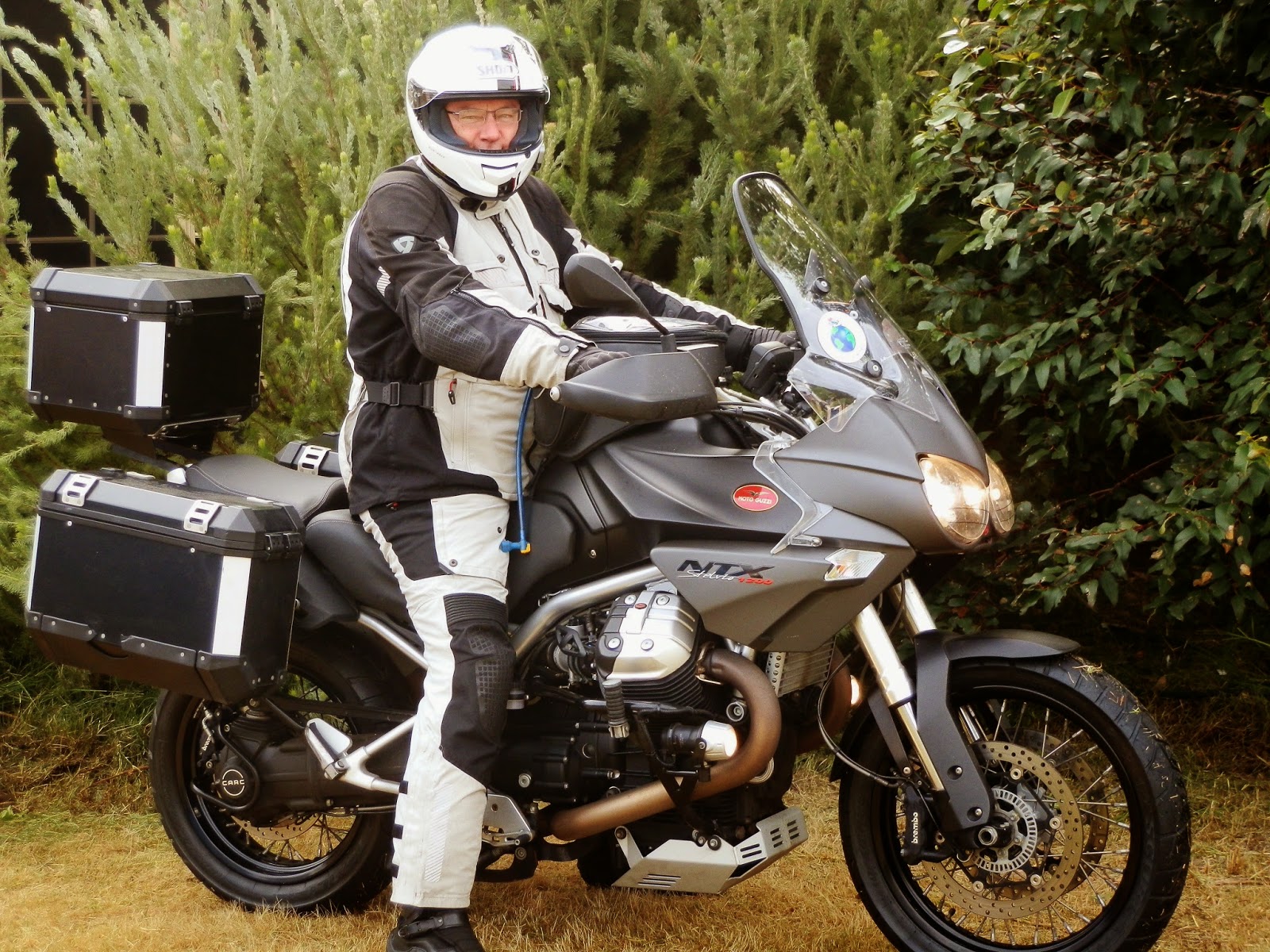 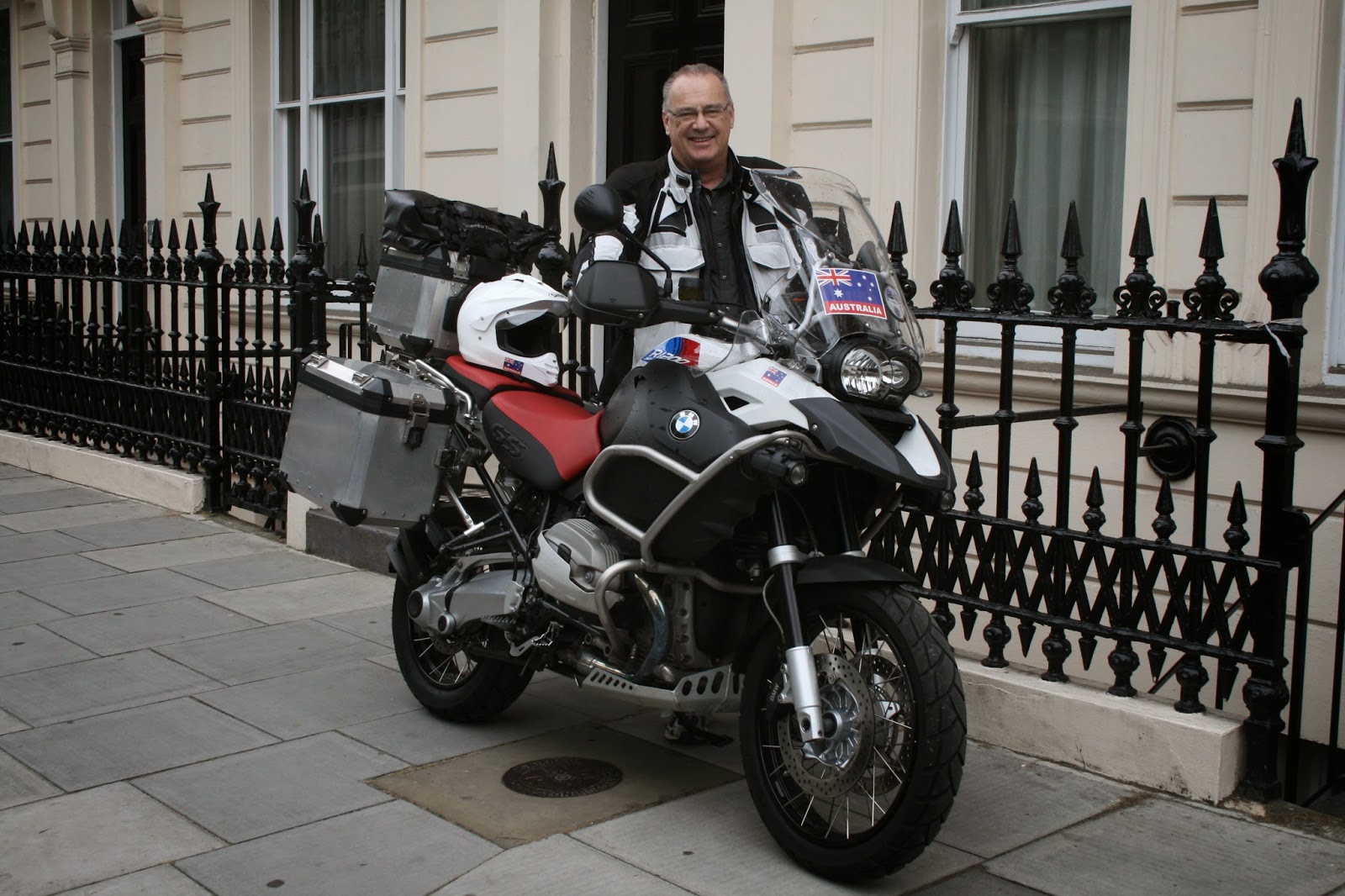 As I spent twelve months riding my R1200GS Adventure (40,000km in Europe) and I now own a Guzzi Stelvio NTX (15,000km in Australia) a lot of people have asked me which bike I prefer, so for the record, here goes...

Once again, I used my own, hard earned Aussie dollars to buy my bikes, with no help from any manufacturer. I'm not suggesting that manufacturer's should pay for my fun, I'm just making it known that I have no allegiance to either company. Because of this I can say what I like about both bikes.

First things first, both of these bikes are bloody fantastic, and I'd be happy to own either of them any time.

On the road the Guzzi wins hands down. It feels a lot more compact and lighter, but it's not. The Guzzi weighs 257kg dry while the BM weighs 229kg dry, according to the manufacturer's web sites. That's a big weight penalty the Guzzi carries, but it doesn't show it, at all. You can ride it like a sports bike and have a ball, scrubbing the tyres right over to the edges.

The BM pumps out more torque, but the Guzzi produces it's maximum torque at lower revs, which makes it feel more "grunty" out of corners.

The Guzzi feels more sporty on a winding road, but it's wheelbase is longer. BM 1,510 mm vs Guzzi 1,535 mm. Again, you just don't feel that this is the case when you're riding.

Off road? Well I haven't done a lot of off road work on the Guzzi yet, so I'll update this more when I have, but I think the BM has the edge here. It feels super stable on the dirt, while the Guzzi feels a little skittish. Of course that could be something as simple as the tyres. Neither of these bikes is an enduro bike and have to be ridden accordingly. They are bloody big road bikes that have off road capability. I used to ride my Yamaha XS1100 on dirt roads, so both of these are heaven compared to that.

Comfort. The BM seat is an abomination. How a manufacturer of such good bikes can make a seat so bad stuns me. Your bum will be looking for a rest long before you need fuel. The pillion seat is good though, according to Suzanne.

Suzanne loves the Guzzi seating position. She sits closer to me. This probably contributes to the more sporty feel of the Guzzi.

The exhaust is very hot on the pillions foot on the Guzzi. It bad enough that I have to do something about modifying it to reduce the discomfort for Suzanne.

The BM panniers are slightly larger, which is a plus.

The Stelvio fuel tank is larger, 32 litres vs 30 litres.

The BM comes with tyre pressure sensors. Now I've laughed at these in the past, but once you've had them they are really handy. It's an easy fix though, and I'll fit a set to the Guzzi next time I replace my tyres.

This biggest plus the BM has is the ESA. Electronic Suspension Adjustment. With the push of a button you can alter the suspension to suit road, off road, solo riding, pillion riding, and more. It's fantastic. Having said that, I haven't found the suspension wanting on the Guzzi, so do I really need the extra complexity of ESA?

The BM has about 30 mm more ground clearance.

There aren't a lot of accessories for the Guzzi, but you could fill a warehouse with BM accessories. The BM tank bag is exceptional while the Guzzi one is too small, the wrong shape, isn't expandable, and doesn't fit the tank snugly. We need a new tank bag Mr Moto Guzzi.

The BM screen offers a bit more protection than the Guzzi's. The Guzzi screen creates a bit of noise in my helmet, but I've fixed that by fitting a Laminar Lip. It's excellent now. Of course this all depends on how tall you are, where you sit on the seat, and lots more, so take it with a grain of salt.

Problems encountered on the BM:
Problems encountered on the Guzzi:
(UPDATE 4/4/15) Before my last minute trip to Tasmania I had the Guzzi serviced by a non Guzzi mechanic, only because the Guzzi mechanic was too busy to fit me in in my extremely short, two day time frame. At this service I queried the mechanical noise coming from the top end of the motor because the bike was very rattly. The mechanic said that they all do that, and that mine was a quiet one. I felt better. Fast forward 10,000 km and I rolled up to my Guzzi mechanic. As I pulled up in the car park he came out and said "The doesn't sound good". It turns out that Guzzi received a batch of cam followers that weren't up to scratch. They wore, then wore the cams as well. This is obviously not Guzzi's fault, but the fault of the outside supplier.

a big wrap. Mario is one of the most professional mechanics I've met, and a passionate Moto Guzzi fan. When I picked my bike up he explained exactly what had been done to my bike and showed me all the old parts he replaced. Now my Stelvio runs like a dream, better that ever, and it came out of his workshop sparkling clean. If you're in Perth Western Australia, and need anything Moto Guzzi, go and see Mario at Thunderbikes, you won't be sorry. http://www.thunderbikes.com.au/shop/


The BM is a very, very good tool to do the job it's designed for. I was really happy with it but after riding it for about 10,000 km I said to a few people "Yeah, it's a great bike, there's nothing wrong with it, but I'll never love it like I do my Speed Triple". On the other hand, I love the Guzzi, so much so that I'm going to get rid of my Speed Triple. I guess that sums it up in one sentence eh?

You see very few Guzzis on the road, and after owning this one I wonder why. It really is a great bike. If you're looking for a new adventure tourer, it will be worth your while popping into your Guzzi dealer for a look. I don't think you would be sorry.

Do not take your Stelvio on the beach, if it's fully loaded, and fitted with road tyres. Old enough to know better, but still young (and stupid) enough to try. ☺ 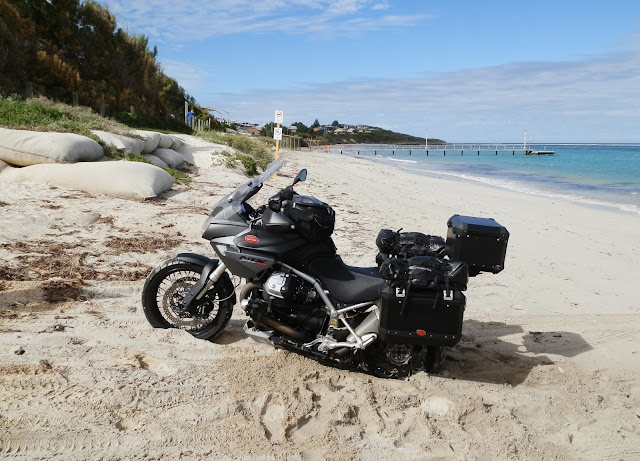 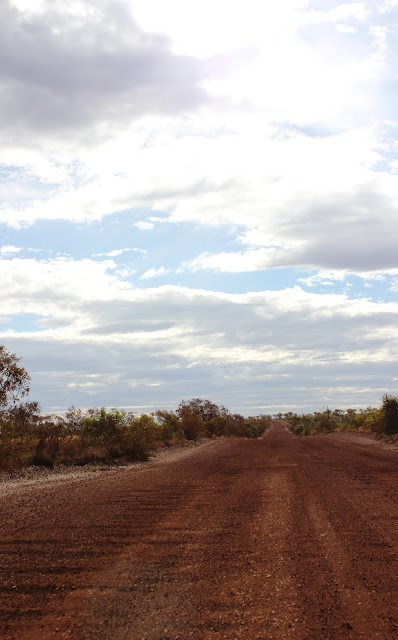 The road nobody takes in Karijini National Park, Western Australia. If no one uses it, why is it so bloody rough?

I know it doesn't look much, but this was the worst road I've ever ridden on, and I've ridden on a lot. Four different people told me not to go down this road, but sometimes you just have to find out for your self, don't you? The corrugations were intense for about forty kilometers and the places without corrugations were deep, soft gravel, along with the odd hole. The poor old Stelvio didn't like it, and I was sure something would break, or at least crack. The screen was flexing back and forth about 50 mm. At the end of the road I was wrecked. The only problem with the Stelvio was a bit of oil on the rear shaft housing that had splashed out the breather. I'll have to invest in one of those breather relocation kits.

I love this bike more and more every time I ride it.

On a weekend ride I discovered a few problems that I believe were caused by my little dirt road excursion in Karijini. My sat nav RAM mounting plate broke, and one of the screen mounting screws has fallen out. If they are the worst things that happen to my bike I'll be a very happy man. ☺
Email ThisBlogThis!Share to TwitterShare to FacebookShare to Pinterest 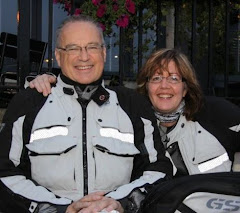 We can change the world.

Simon
Simon - I've been riding since I was sixteen (a long time ago) and am still loving it. I've always owned both road and dirt bikes (six at the moment)and an extended trip travelling by bike has always been a dream of mine. We now have the opportunity to follow that dream... Life is short, get out there and enjoy it.

My dad taught me to ride a little red posty bike when I was a teenager. I loved it and have fond memories of exploring the mountains around Wye River in Victoria, Australia. I've always had something to do with motorcycling, either riding or pit tootsying for Simon at Enduros. I still miss my XR200.

I've been Face & Body Painting for the past 14 years, so I hope to catch up with some painty people on this trip.

I'm looking forward to a nice comfy ride snuggled behind Simon, but I don't do roads on cliffs.